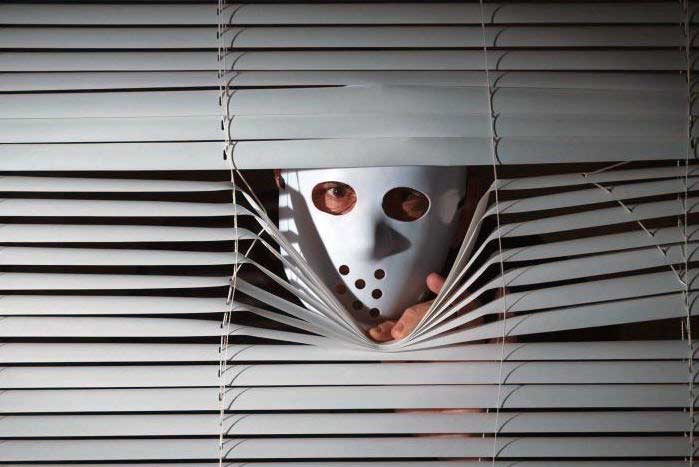 Thanks to the entertainment industry, most people are quite familiar with the term ‘psychopath’. We think of a psychopath as a dangerous, scary person who is out to wreck vengeance; or someone who is disturbed enough to carry out horrific acts of violence.

But most psychopaths are not homicidal or a threat to society.  Many are in fact likeable, educated and well-respected members of society.  But when it comes to choosing a profession, people with psychopathic traits are often found in positions that confer power and authority.

In a survey of 5400 individuals from a wide range of professions, Oxford University psychologist Kevin Dutton compiled a list of the top 10 jobs that ranked highest and lowest for psychopathic traits.The results showed that CEO’s at least in the UK, came out at the top of the list.

“Being a CEO or in a position of true power requires certain skills and abilities that psychopaths exhibit with ease. Making objective, clinical decisions entirely void of emotion, planning meticulously and in great detail, being patient, restless and confident, having a need to be in control… are all characteristics that psychopaths and prominent leaders share.”

These findings tallied with other research linking psychopathy with CEO’s and leaders of the corporate world. Research has shown that in the general population, around 1% of people meet the classification for a psychopath, but among industry leaders the figure is 4 times higher.

So what makes someone a psychopath?

Robert Hare has spent over 35 years researching psychopathy and is the world’s foremost specialist on the subject. He has described a psychopath as:

“A social predator who often charms and manipulates his or her way through life. Psychopaths are completely lacking in conscience and in feelings for others; they take what they want and do as they please without the slightest sense of guilt or regret.” Hare 1993

In the 1970’s, Hare, building on the work of pioneering psychologist Hervey M. Cleckley, devised what later became the Hare Psychopathy Checklist-Revised (PCL-R), a diagnostic tool widely used by researchers and clinicians, to assess people in psychiatric units, prisons and other settings.

Hare’s checklist includes a list of 20 different psychopathic or antisocial tendencies. These are: 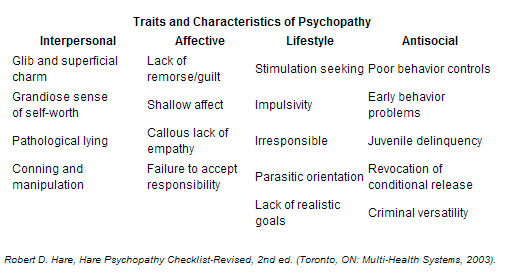 Although books have been written about Hare’s ‘psychopath test’, and some websites claim to be able to assess your level of psychopathy,  the test is designed only to be administered by specifically trained professionals. The list, however gives some clues about the types of personality traits you would expect to find in your average psychopath.

How do psychopaths succeed in the corporate world?

Psychopathy is now widely understood to be part of a person’s genetic structure. But if someone with such a genetic disposition is raised in a nurturing, stable environment – with all educational and social benefits that a good home provides – they may be able to escape most of the negative consequences we often associate with the image of a psychopath.

However, the psychopath is attracted by power, and is naturally drawn to jobs and positions that allow then to wield some form of authority and influence. Whilst they may not make good managers, they can make great leaders and can inspire people with their charm, confidence and glibness.

Studies have found that CEOs with high psychopathy scores, were also rated as having strong charisma/presentation, creativity, good strategic thinking and communication skills by their co-workers. Despite scoring badly on being a team player, having poor management skills, they seemed to be well liked.

Why are there so many psychopaths in business?

Paul Verhaeghe, a Dutch psychologist and psychotherapist has a simple argument to explain the high incidence of psychopathy in the modern corporate world. He points the finger at our current economic system, neoliberal capitalism.

To succeed in business these days it helps to have a somewhat inflated sense of self-worth, and to exude confidence and charm. Decision makers also need to be flexible in their opinions and be able to grasp opportunities when they see one. Research also suggests that psychopaths and entrepreneurs share some traits in their methods for achieving success.

Is there a sweet spot?

So if it’s true that some psychopathics traits can be a benefit in the corporate world, how do we balance the needs of business with our own ethical frameworks? Is there a sweet spot for successful business leaders that falls between the average individual, and a textbook psychopath?

For instance. sometimes leaders have to take tough decisions, so being low on empathy might be an advantage. At closing a business deal is easier if you exude charm and confidence.

But other psychopathic traits, such as lying, lack of guilt, dishonesty, and failure to accept responsibility for your actions are widely seen to be signs of moral failure.

Therefore we need to be honest and objective when we consider what makes a good business leader. Saint, sinner, or somewhere in between?