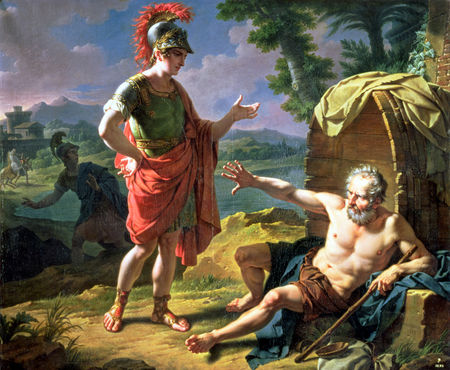 Philosophers aren’t renowned for their outrageous behavior, but Diogenes of Synope ranks as one of the most controversial and eccentric thought leaders of all time 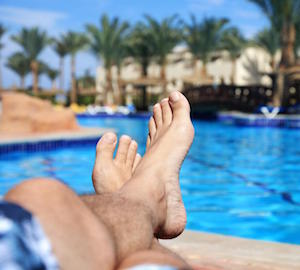 Imagine lounging by the pool in your bathing suit, soaking up the sun and enjoying a cold drink.

Out of nowhere you notice Barack Obama and a secret service agent approaching you.

President Obama warmly shakes your hand, introduces himself, and asks if there is anything that he can possibly do for you.

What would you say?

Now imagine this scene happening 2400 years ago, in ancient Greece. Diogenes of Sinope, also known as Diogenes the Cynic, is sitting in the morning sun, the picture of relaxation.

He is elderly, barefoot, and wearing only a simple, tattered robe. Alexander the Great, Emperor of Greece, is excited to meet the great philosopher. Alexander greets Diogenes, asking if there is any favor he might do for him. Diogenes, completely unimpressed, replies, “Yes, stand out of my sunlight“.

Digonese tells Alexander, leader of the civilised world, to push off

Diogenes had just publicly mocked the leader of the entire civilized world and got away with it. It certainly wasn’t the first time that Diogenes had said something offensive – he was the ultimate troll, known throughout history for his deliberate provocations, wit, and highly unusual behavior.

He lived as a beggar and held extreme poverty to be a great virtue. He regarded social conventions and human achievement with great contempt. Plato, referred to Diogenes as “Socrates gone mad“.

To say Diogenes was eccentric would be an understatement, but there was method to his madness. His lifestyle and teachings proved to be a very effective social commentary on the hypocrisy, double standards and decadence of society in Athens at the time.

Diogenes is credited with having founded the Cynic School of philosophy. During his lifetime, Athens had become the popular place for free thinkers from all over the Mediterranean and Near East to hang out. As such, the city was teeming with philosophers, and the Cynics were probably the craziest of the bunch.

The name Cynic comes from the Greek word for dog, since is how Cynic behavior appeared – they went barefoot and lived outside. It wasn’t until the 19th Century that the word came to mean a jaded, negative, or self interested person. The Cynics didn’t hate humanity, but they did tend make fun of people for their conformity and consumerism.

Unlike academic philosophers today, the Cynics were not concerned with theory. Diogenes believed that virtue was better demonstrated in practice. He taught by example, and prompted people to think by deliberately making a mockery of cherished social conventions.

All his writings have been lost, and what we know about his life was documented by later authors. But his theatrics and wise cracks definitely are legendary. Here are six stories that suggest that Diogenes was the greatest troll of ancient history.

He lived in a barrel

According to folklore, trolls live under bridges, but Diogenes went one better. In keeping with his belief in austerity, he’ took up residence in a large clay wine jar belonging to the temple of Cybele in Athens. He felt that this was a good home, since it forced him to place no importance on the weather.

Besides his only piece of clothing, a robe, he owned a single bowl. One day, after seeing a peasant drinking from his hands, Diogenes decided to throw the bowl away, noting that he had been carrying around unnecessary baggage.

He did some really gross things in public

Diogenes carried a lamp around the Athens in broad daylight. When asked why he was carrying a lamp during the day, he said that he was looking for an honest man, but found only frauds and hypocrites.

Diogenes often ate in the marketplace, even though it was considered taboo at the time. When people pointed out that it was inappropriate, he replied that it is in fact appropriate to eat when you are hungry.

He seriously pissed off his own mentor

Diogenes came to Athens from modern day Turkey, and began following the philosopher Antisthenes, a disciple of Socrates. Antisthenes was an ascetic, living a life devoid of wordly pleasures. He had taken Socrates’ teachings and expanded on them, concluding that, “I would rather be mad than feel pleasure.”

Diogenes hounded Antisthenes day and night, until the old man would agree take him on as a student. At one point Antisthenes, tired of being followed around, is rumored to have beaten Diogenese back with a stick. Undeterred, Diogenes is thought to have said, “Strike, for you will find no wood hard enough to keep me away from you, so long as I think you’ve something to teach.”

Diogenes’ persistence paid off. He eventually became Antisthenes’ pupil and went beyond his teacher to become the archetypal example of the Cynic’s frugal way life.

The Cynics were concerned with living the philosophical ideal, rather than book knowledge. Hence Diogenes had no patience for Plato – regarded by some as one of the world’s greatest philosophers – and his endless theorizing. Diogenes regularly came to the Plato’s Academy to heckle and disrupt the lectures.

In one famous anecdote, Plato attempted to characterize humanity using the definition of his teacher Socrates. Humans were, in his words, “featherless bipeds.”

On hearing the news, Diogenese brought a plucked chicken to the Academy, announcing he had found Plato’s human. Diogenes won the argument. The Academics were forced to revise their definition of a human, albeit to a ‘flat-nailed featherless biped‘.

He had no respect for the wealthy and powerful

Diogenes was counter-cultural – he rejected ideas about fame, status, and class. He would often ridicule rich, finely dressed citizens of Athens, pointing out that the money they spent on their clothes could have been put to better use.

Another version of the story of his meeting with Alexander has Diogenes scrounging around in a trash pile which included human bones. When Alexander asked what he was doing, Diogenes said, “I am searching for the bones of your father but cannot distinguish them from those of his slave.”

Diogenes was pointing out that regardless of our social position or the amount of money we have, we are all equal in death.

Far from being insulted, Alexander declared, “Were I not Alexander, I would like to be Diogenes.” Alexander may have taken a lesson from Diogenes’ playbook. When he was dying, he said, “Even, I, the Great King who unified Europe, goes empty handed when he dies.”

He didn’t mind being kidnapped and enslaved

Another anecdote passed down through history is that Diogenes was taken prisoner by pirates on a trip to the island of Aegina. Diogenese and the other prisoners weren’t given enough food, even though the pirates intended to sell them as slaves.

Diogenes pointed out that if you are going to sell sheep, wouldn’t you fatten them up to get the highest price? Seeing the logic here, the pirates began giving the prisoners more food.

The slaves were taken to Crete to be sold at auction. One man was understandably upset at the situation, but Diogenes counseled him to just take things as they come in life. Slaves were usually asked where they came from and what their skills were. After making fun of the auctioneer and the audience, Diogenes noted that his skills were “Teaching values to people.” Spotting a well dressed man in the audience, Diogenes said, “That man cold use a master, sell me to him!”

The well dressed man, Xeniades, appreciated his sense of humor. He bought Diogenes, who went with him to his home in Corinth. Diogenes became an instructor for Xeniades’ sons, who loved their teacher. Diogenese refused offers of ransom for his release by friends. Some versions of the story have Diogenes living out the rest of his life in Xeniades house, since he died in Corinth.

Despite his reputation and erratic behavior, Diogenes was admired by many. He was considered a near-sage or an ideal philosopher by the Stoics, another school of thought which he directly influenced. And when he died, the Corinthians built a statue of a dog in honor of his memory.

So perhaps we can all learn a life lesson or two  from Diogenes – the value of simplicity, critical thinking, mindfulness, and a good sense humor.