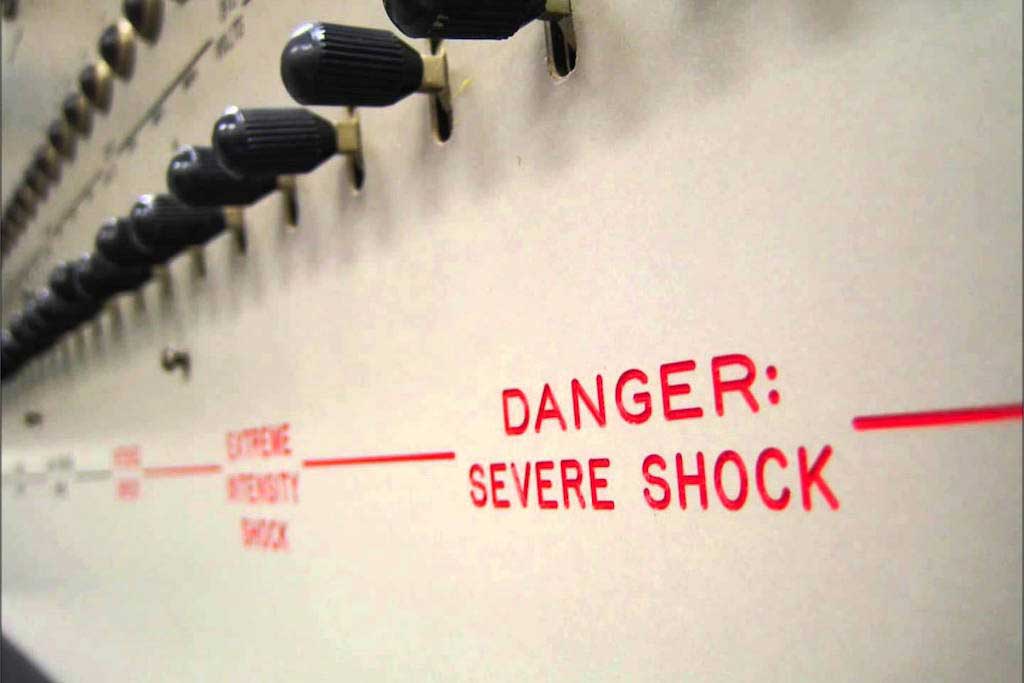 The villain of the Harry Potter book series, Lord Voldemort, used a thought altering spell to persuade others to obey his commands. Real world villains throughout history have not had this advantage.  Nevertheless many have instilled a similar level of obedience in their underlings, often convincing them to commit horrific acts.

Adolf Eichmann, when on trial for Nazi war crimes famously claimed he was “just following orders“. Although he helped mastermind the extermination of millions of Jews, Eichmann insisted he was merely a little cog in the machinery of Hitler’s murderous regime, and couldn’t be blamed for his actions.

After World War II ended, a number of social scientists tried to understand the circumstances and conditions that allowed people to hurt each other to such an extent. Notable among them was Dr. Stanley Milgram, who tried to understand how people could obey commands that were clearly inhuman.

In 1961, Milgram started a series of experiments to study obedience to authority at Yale University. Male participants were paid handsomely for their participation in what was described as an experiment on learning and memory. Each participant who was selected was assigned the role of a teacher in a memory test, and was required to ask another person who sat in the next room a series of questions via intercom.

When the participant expressed concern about giving the shocks, the researcher asked them to continue. Milgram’s experiments found that when the conditions are right, over 60% of the participants administered the highest level shock. He concluded that people have a tendency to obey instructions; even if the instructions make them uncomfortable or unhappy.

Although undoubtably unethical, Milgram’s research proved illuminating  and has continued to stand as a landmark in understanding human behaviour in extreme conditions.

Over the years, the original findings have received a lot of criticism. People believed that Milgram did not try to explore the reasons why people obey destructive instructions. To fill this gap, some researchers tried to see how obedience applies to real life situations.

Others went back to the data from Milgram’s original experiments and tried to see what factors affect obedience behaviour. Recently, some studies – like the one conducted by Dr. Burger in 2009 – replicated some of Milgram’s original work, but with more controls.

There seem to be a distinct number of factors that play a huge role in deciding who gets obeyed more frequently, and who doesn’t.

Why do people obey authority figures?

Milgram had suggested that people could have two states of behaviour. The first is the autonomous state, where people take their own decisions. In this state, people take responsibility for their choices, and the consequences of those choices.

Based on the research findings, we are more likely to be autonomous when people if authority figures are not able to observe us.  We are also more likely to do what feels right to us if we have some social support, or if the person issuing orders doesn’t seem commanding or legitimate.

On the other hand, we are prone to become agentic when orders come from someone who seems legitimately authoritative, and when he/she seems to know what they are talking about. People are also likely to obey an order if they think their actions are being observed.

Understanding how these details apply can help us understand situations where we are likely to be autonomous, and in control of our decision-making, or agentic, and more susceptible to the will of others.

1 thought on “The infamous experiment that shocked the world”