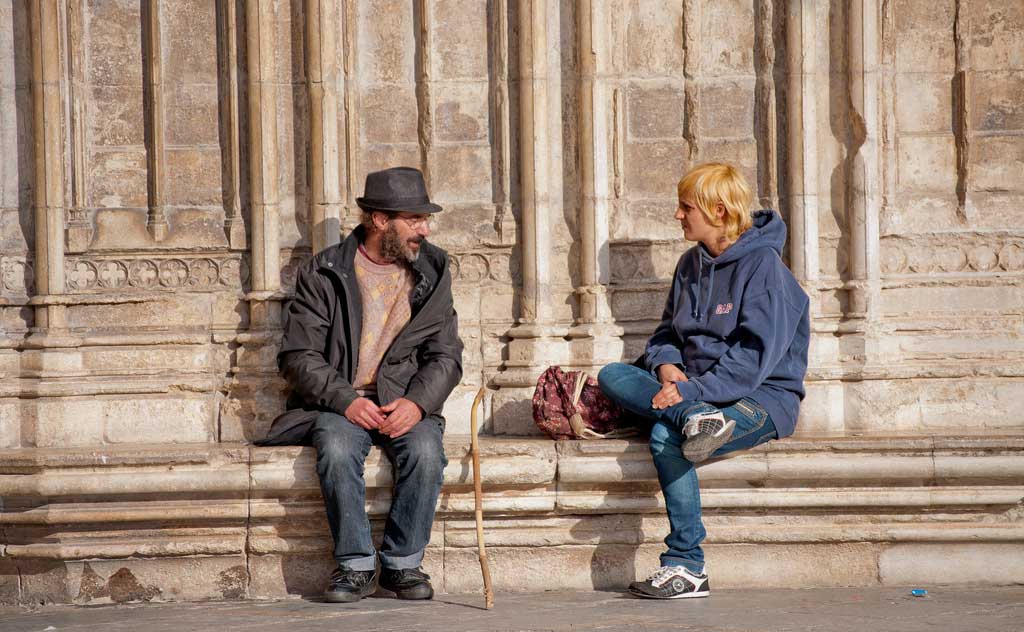 Chatting to complete strangers might seem like a social taboo, but it can bring a surprising range of positive benefits

More people live in urban settings than ever before. 54% of the world’s population now live in cities, surburbs and towns, and that number is expected to continue rising.

The global population shift from the rural to the urban forges new human relationships as disparate individuals are brought together. But it also puts us in close contact with a lot of new faces – strangers. And they are everywhere.

There are strangers who live in our apartment buildings and neighborhoods; strangers who we share our commute with; and strangers in our workplace. And most of us have been taught from an early age to be wary of these strangers.

It’s become the norm to avert our eyes when passing them in hallways; we fiddle with our phones or read books when we commute; and in most social settings. we tune out or actively ignore people we don’t know or recognise.

And yet, these very strangers may be the key to unlocking the best in ourselves, to experiencing better moods, and to having overall more pleasant experiences. At least, this is what researchers are finding across different contexts. The small social cost of starting a conversation with a stranger seems to reap a slew of benefits that we never anticipated.

Researchers Epley and Schroeder conducted a series of studies in 2014 to see whether making small talk with strangers was good or bad for people’s travel experiences. They asked research participants to interact with strangers when using public transport.

They found that although people expected that talking to strangers would be less pleasant; in truth, it was more pleasant than sitting alone. The participants also said that they found their commute just as productive and fulfilling as the days when they did something alone.

The researchers found that chatting with strangers gave people the same boost that being helpful does. People reported the same emotional benefits as they received when doing good works – news that’s bound to make chatter-boxes everywhere happy!

What if they’re not in the mood to chat?

If this is how easy it is to feel good, why don’t people talk to each other more often? Epley and Schroeder think that our hesitation has a lot to do with not knowing if others want to talk to them. Most people think that fellow commuters wouldn’t be interested in having a stranger strike up a conversation. And because of this fear of being snubbed or rejected, most people keep to themselves rather than disturbing someone who may not want to talk.

It doesn’t matter if you’re shy

Friendly neighbors can improve your health

Another study found that there are other unexpected benefits when we’re friendly (or at least civil) with our neighbors. Data collected on a number of variables associated with healthy living showed that people who develop friendly neighborhood connections seem have better mental and social health. If this were not enough, these individuals seem to also have a lesser risk of fatal heart attacks.

…but don’t jump to conclusions

The researchers of this study are quick to point out that the relationship between being friendly and health is not a cause-and-effect one; and many small and large factors will likely be found to play a role.

They believe that some of the benefits could be due to the fact that regular interactions with neighbors means that more people have the opportunity to observe us and warn us if they see signs of ill-health. It could also be that the positive mood we experience after talking to people we know socially helps in some way to bolster our health.

Talk to the cabbie to speed up a ride

Epley also surveyed people to find out if they spoke to the driver when they took a cab ride. Some participants said they regularly did, while others preferred to sit in silence.

The data collected showed that those people who talked to drivers not only enjoyed the ride more; but they also felt that time went faster.

What was even more interesting was that people who were already in the habit of chatting with their drivers had anticipated this positive experience. This means that their existing habits were likely formed because they already knew about the benefits of small talk at some level.

Most people who like to shop will admit that having a friend on a shopping trip feels great. But you don’t need to have a friend along to make your shopping experience a positive one.

A study on ‘consumer interactions’  found that people who more chatty and friendly towards other customers enjoy their shopping experience more than those who keep to themselves.

The positive effect was also noticed when people interacted with shop employees, took their opinions and engaged in other small talk.

Strangers in the chatroom?

Without ignoring the obvious risks and dangers, the benefits of interacting with strangers even extends to the online world of chatrooms and  social media – particularly for adolescents.

Safe and positive online interactions can help teens relieve social anxiety and enhance social skills. Adolescents can learn how to engage with new ideas and perspectives, and gain support and advice that helps them build their social repertoire.

The study also warns that interacting with faceless strangers can be a risky proposition; and it is vital to help teens find the right tools to identify risks and safeguard themselves.

How and why does small-talk work?

Small talk feels good because it affirms us, our ideas, and our worth. When we interact with strangers, we automatically take the effort to be polite, nice and friendly. And so does the other person.

This means that both parties experience these conversations as positive events, and go away feeling validated and attended to. Such pleasant interactions with strangers are topical and relatively shallow; but they boost our sense of being accepted (and thus our mood) simply because it was nice to agree with someone; or to exchange compliments.

Interacting with a stranger works on many levels. There is the instant mood lift and validation that we receive from a cordial conversation. These interactions also increase our confidence in ourselves and our ability to explain our views to others.

Since these strangers know nothing about us, being able to explain our ideas to them helps us learn and practice how to articulate the smallest of our thoughts. It can even improve our social network by giving us opportunities to meet potential friends, business partners, and mentors.

Strangers open our eyes to the world

Talking to strangers also means that there’s always a chance of meeting someone who thinks differently from us. Whilst some might frame this in a negative way, it gives us the opportunity to understand new perspectives, and to learn about different experiences and ideas.

Talking to people with different backgrounds can help us understand the first hand experience of other groups. In turn, this helps us become more understanding, more accepting and more aware of the wide variety of experiences out there in the world. We become more sensitive and empathetic..

None of this indicates that we should bare all when talking to strangers. If someone asks uncomfortable questions, it’s OK to refuse answers, or to end the conversation. The idea is to have light conversation that is enriching (but not disturbing) for both parties.